Are you willing to bet against Google?

The cover of Fast Company magazine recently caught my eye. A photo of Larry Page, CEO of Google, was plastered on the front, with the heading, “Look out Apple, Facebook & Amazon – Why Google will win.” The cover was a plug for an article inside called “The Great Tech War of 2012. (http://www.fastcompany.com/magazine/160/tech-wars-2012-amazon-apple-google-facebook)

I pulled it off the shelf. That’s when things got interesting.

Behind it was a red-colored version of the same magazine, but with Steve Jobs face on the cover and a headline, “Why Apple Will Win.” A little more rummaging lead me to find a total of four versions of the same Nov 2011 issue, a clever ploy to promote the article. The other versions exclaimed why Facebook or Amazon would win.

The quandary then became, “Which cover to purchase?” 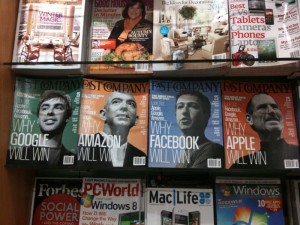 All 4 companies have disrupted various industries. In a period of less than 5 years they have changed the entertainment, music, publishing and media industries. They had also disrupted gaming, retail, mobile, communications and advertising. Payment systems and cloud computing are on their radar.

Initially I gravitated towards the Apple cover, but Steve Jobs prominent photo started looking like a question mark to me with his recent death and the uncertainty of continued innovation.

Amazon is brazen and innovative, but anchored to the end of the commerce funnel. Not a bad place to be, but limited. I figured it would come down to who controlled insights on people and information. Facebook arguably knows more about our behaviours than we do ourselves, and they have the muscle to leverage that knowledge. But in the end I chose the Google cover. Why?

Google owns search. When we are searching, we are seeking. And seeking is the beginning of every desire. Now that they have entered the foray of social media with Google +

I believe they will ultimately hold the trump card. They can access our profile and the gateway to our desired transactions. They will have the ability to utilize our preferences and the influence of our social circle to control our individual search results. Suddenly, it’s not just a Google search, it’s “knowing you, I would suggest,” and that becomes extremely powerful. Powerful ultimately, since marketers will pay attention to it.

My own personal example: I received an invitation to join Google+ from a colleague. I created a quick account, putting minimal content on it. Doing a search a week later, to my horror, the Google+ link had outranked my company website and fiveminutemarketing.com blog, each with a long history, massive content, and multiple links on the web. I have since made the account more robust and now monitor how content ranks.

Here are my take-aways:

1.     Google+ is in search results like never before. A Google+ profile outranks other content. You may feel that using their clout to adjust rankings in their favour is unfair, but it’s a compelling reason to claim a Google+ profile.

2.     You will want to create large circles. Everything you share on Google+ will be ranked higher, and if you have more people in your circles it will be ranked higher still. Because Google now appears to favour quality content, you can use that to position yourself. You would be foolish to not share everything through Google+ to boost your search rankings.

3.     Their recent “Google Search Plus Your World” introduced the influence of your social circle into search results. Logged in users receive socially shared content from their circles in the results – essentially tying social media into search results. Although the bias appears to diminish when logged out, Google+ linked content still rises in the search rankings. Facebook’s power is its 800 million users. Google+ with a current 90 million users may seem small by comparison. However when you combine the billions of people doing billions of searches daily on Google, the user group and influence is exponential.

Is Google+ just another social media tool to maintain? Yes, but the choice not to participate could have far reaching implications on your business. In the end I bought the Larry Page cover of Fast Company because I am not willing to bet against Google. Are you?

Want to connect on Google+? http://bit.ly/xcTbco